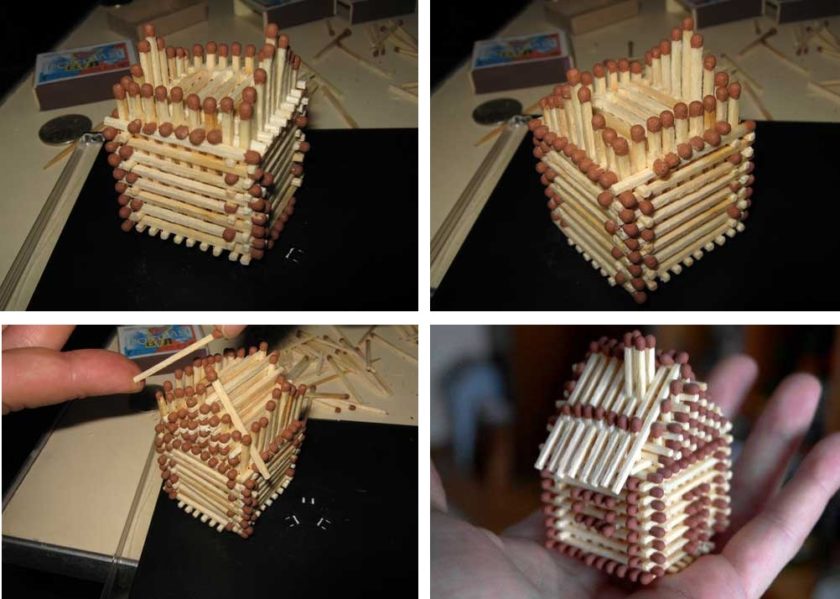 Crafts from natural wood are considered not only eco-friendly, but also very beautiful. And if the carving, construction and assembly of complex designs is not by everyone’s power, then even a child will be able to assemble a simple house of matches.

To do this, you will not need anything other than the material that is found in any home, as well as sleight of hand and patience. Having coped with this design, you can show fantasy or perfect it – crafts from matches are not limited to anything, except for flight of imagination and creative approach.

Master-class to collect a house of matches for some half an hour will allow you with a minimal investment to get an interesting design, which can be used both in games with the child, and in the interior. To do this you will need:

Making a small house of matches is easier on a flat surface, so get creative at the table, first releasing it. Make sure that the table does not stagger – it can play a cruel joke at the most unfortunate moment, reducing all your efforts to zero. Also take care of the absence of foreign air movement (for example, a fan, air conditioner or banal draft), because before the completion of the assembly the structure will be rather flimsy.

The support for the construction must be perfectly even and smooth. It is best to use a plastic box from the CD-ROM – the diameter of the attachment is on average the distance between the walls. A toothpick is needed to align the matches with each other, and a coin will help during the strengthening of the structure.

To build light houses, it is not necessary to use glue – stability is achieved due to the dense arrangement and the correct intertwining of matches. However, novice builders can glue the elements together – such a building, although it will not look so aesthetic due to the glue that is emerging, but make it much easier.

An easy way to build House of Matchsticks

1. To begin with, it is necessary to prepare “building material”. To do this, sprinkle a box of matches on the table and gently sort out, excluding all defective copies with chipped and burrs.

2. On the stand, place 2 matches parallel to each other at a distance slightly less than the length of the match. In this case, the heads must be placed on the same side.

3. Perpendicularly arrange the flooring of eight matches, all the heads of which will “look” in one direction. Over the top, lay one more same layer perpendicular to the previous one.

4. Lay a well of seven layers of 2 parallel matches each. Do not forget to place the sulfur heads in a certain order (clockwise or counterclockwise) – then the house will look aesthetic.

5. Repeat the manipulation with the formation of two perpendicular decks, slightly changing their composition: the first will consist, as before, of 8 matches, and the second – of six.

6. At the corners of the resulting design, insert 4 vertically arranged matches. Between them lay a coin – this will help make the house more stable and facilitate the implementation of further manipulation.

7. Vertical match-pins must be passed around the perimeter of the building, placing the heads on one level. Having thus strengthened the walls, you can get a coin – it will no longer come in handy.

8. Tighten each side tightly, placing the matches as close as possible to each other. However, do not overdo it, otherwise your building materials may break or bend.

9. Turn the cube “upside down” and lay on top of the walls forming it another one layer of matches to finally strengthen the structure. Do not forget about the proper location of sulfur heads, so as not to spoil the appearance of the house.

10. Now you have to make a roof. To do this, half-pull matches, vertically located at the top of the housing of the house. Place the roof layers, each time reducing the number of matches. As a result, you should get a triangular flooring.

11. Cover the resulting roof with an improvised roof – a layer of building elements. This will be the last stage in the construction of the basic structure of the house. Subsequently, you can improve it with the help of additional elements – pipes, windows, doors, etc.

For the gluing of matches, almost any glue is suitable, but it is better to use PVA – it does not dry up so quickly, so you can adjust the assembly process, and traces of it can easily be removed with an ordinary cotton swab. To apply glue you will need a very thin brush, the diameter of which will not exceed the width of the match rib.

The process itself will not differ from the above, but the fastening of the elements will become easier and more reliable. To this process, you can connect and children – so they will quickly learn a small monotonous work, which requires accuracy and accuracy. Together you can collect not only unpretentious houses, but also whole city compositions: a church, a well, multi-storey houses, a farm, a fence and even cars.

As a playground, you can use a special rug or independently build on the sheet of Whatman a territory equipped with roads, traffic lights and other indispensable attributes of the urban landscape. Your baby will certainly appreciate your own metropolis, built from matches!