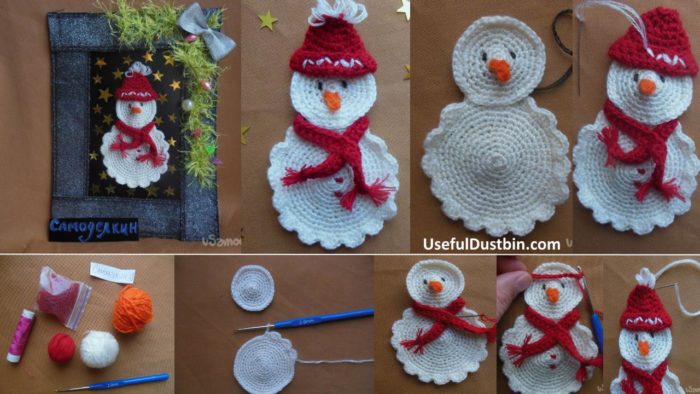 New Year ideas continue to conquer the needlewomen! In recent days, I would like to create something special, a thing that will not only complement the basic gift, but will also become a pleasant moment for the addressee of the year of the departing! Such a “pleasant trifle” for everyone will be a cute crocheted snowman, because his appearance, he once again reminds of the upcoming holiday.

Video Tutorial : Do You Want To Knit A Snowman?

Such an application can be made using a conventional hook for knitting and yarn remnants.

From the white yarn, create a chain in 4 air loops and assemble into a ring. Knit the main parts (of which only two) will be a circular knitted column without a crochet (art./b.n).

The first circle (head) is knitted smaller, the second (trunk) is 1.5 times larger than the first.

The body is made figurative, tying the contour of the circle with “denticles” (we fasten 4 sticks with one cuff from one hole, repeating the procedure every 2 loops).

We sew the details with a needle and a thread, make a nose-carrot in the center of the face. We pull the loop from the wrong side and knit a chain of 5-6 air loops (we leave the thread before work, on the front side). Then we tie this chain to the st. / B. and put the last loop at work (on the wrong side).

Eyes can be made from beads or simply embroidered with black yarn.

Now we proceed to the details. It is these bright things that make a snowman expressive. The scarf, like all elements of this applique, is made from the chain of st. / B. n. Its length is adjusted by fitting (this sample consists of 40 air loops).

At the ends make “brushes” and sew (knotted around the neck) scarf with a needle and thread.

The buttons here are unusually black, as, in fact, the number (two instead of three). Sew them in the center, slightly below the junction of the scarf.

The cap should be integral and voluminous (that is, cover not only the front part of the head), therefore a long chain, assembled into a ring, is continuously knitted with circular knitting.
Length adjustable by fitting, picking up as many stitches that will wrap your head completely.

During the mating process, you should also carry out several tests so as not to miss the moment of cutting the loops.

Remove the loops in the last two rows (there is a sharp decline), where the last loop is closed.

Sew and decorate the headgear at your own discretion (doing or vice versa, without making a pattern, fields, bubo).

Arrange the composition also at will, gluing the finished element to fabric, colored cardboard, factory stock or even to gift wrapping. The version proposed below is decorated with a New Year’s frame from an old belt (one of the previous master classes ).