Knitted pattern with knitting needles is known to most needle women. It is a small geometric figure of black and white color, reminiscent of a cage. This pattern, like all the numerous ornaments, came to us from far-off Scotland. In Europe it is called “dog fang”, and in our country it has acquired a more peaceful name. The goose-foot effect is achieved thanks to a special cross-weave of white and black thread. This fabric becomes smooth and light to the touch.

For a long time this pattern was considered old-fashioned and created for the elderly. But in the 21st century the crow’s foot got its second birth and appeared on fashion shows of clothes. Such an ornament is often used for everyday clothes in a business style. It will look great skirt pencil, jacket and jacket. In this article, you will see the diagrams and their description, along which you can connect a stylish goose-paw on the spokes.

Knitting Patterns for a Goose Paw

Thanks to this ornament, you can knit any element of the wardrobe. Basically, white and black threads are used, but quite often many other combinations of contrasting colors began to occur. Sometimes beginner needlewomen can confuse the pattern of crow’s feet with the same common knitting as a peceth. But they have small differences, which can be seen on the presented scheme.

The following diagram shows how the product is knitted in other colors, using the example of blue and green threads. 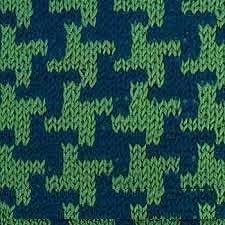 Of course, knitting such a pattern as a crow’s foot is not an easy task. It requires care and maximum assiduity. In this lesson, we will offer a description of the scheme, for knitting the crow’s feet in the technique of a lazy jacquard .

In the work on this pattern, the use of elongated loops is envisaged. To make an exemplary sample, you need to dial the number of loops, which are a multiple of six. And also consider the edge loops at the beginning of the row and at the end.

The first row will consist of white threads. Correct the repeated fragment of the pattern, namely: remove one loop, the thread remains behind the canvas, and then tie five facial. Then you sew the next row. It is done according to the same principle as the previous one, but only knit the purl loops with the thread passing in front of the product. Change the thread to black and tie the strip in the same way as the first row. Again, we remove one loop and we sew five loops in the wrong way.

Next, white yarn is used. Remove three loops at once. The thread is located in front of the mating. One loop is done face-to-face, the next one is removed, and after it goes facial. It is very important to keep a close eye on the scheme, otherwise you can get off the pattern and spoil the conceived ornament. If you see that it does not work the first time, spread out the wrong crow’s feet and start knitting again. Next line is the sixth line. The wrong is sewn, then the buttonhole is removed, and behind it is knitted again the wrong side. Remove three more pieces so that the yarn is in front of the product.

A black thread enters the work. Knit three facial, then one eyelet is removed from the thread, which is located behind the canvas, and two more loops are made in the face. In such a sequence, tie the entire series to the very end. And the final line of the scheme. Spare two knitting needles with the backs, then one is removed from the front thread and three other purl sets are made.

You just have to start the repetition from the very first row, which is described above in the text.
For beginners, it may seem that knitting with knitting needles is not an easy pattern, like a crow’s foot is not an easy task. Do not think that the first time something can happen. Having trained to knit not big fragments on needles, in due course at you necessarily all will turn out. But you can create for yourself a strict black and white outfit for work, which will give your image some kind of officiality.

In order to consolidate the theoretical course of knitting, we offer to see a visual video lesson.

Video: We knit the crow’s feet