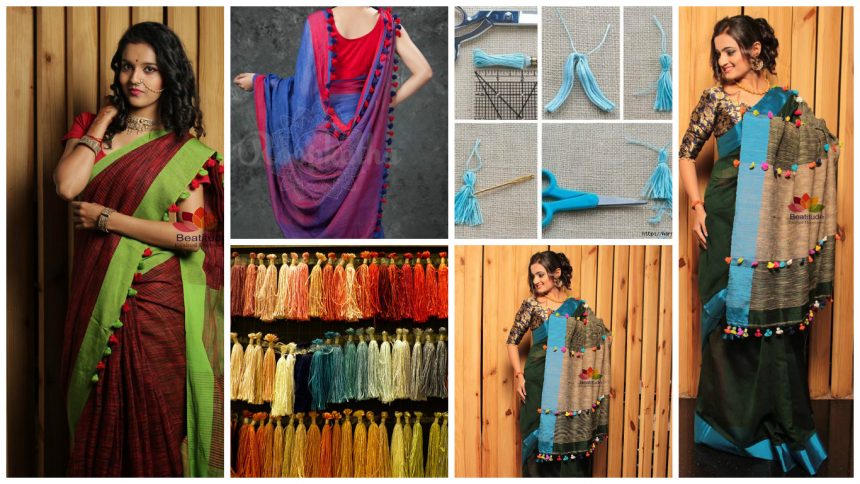 How to make tassel decorated saree First, decide on the length of the tassel you want.Cut out a piece of cardboard which is 1/2 inch longer than this. Your fingers can replace this if you are in a hurry. I think I have seen someone use a fork to make tassels.

(If you are not using the cardboard make a bundle of threads which are about 18″ long. It’s easier to start longer and trim than to use pieces which are short and hard to handle.) Wrap embroidery cotton thread around the cardboard; some 20 times is what I have done. When you wrap remember that the tassel will be as thick as the thread on both sides of the cardboard. Remember to keep the threads on the centre of the cardboard and not spread out.also make sure you are not wrapping the thread too tight that the cardboard is bending or too loose that the loops are slipping out. the tension should be even.
Stop the wrapping when you feel it has reached the thickness you want.

Now we have to remove it from the form.

Cut out a piece of thread, thread it through a thick needle. Slip the needle between the cardboard and the thread loops. Tie a knot.

Slip the loop from the cardboard carefully.Once it is off the form cut away any tails.

Tie the tassel at the neck. The neck is some 1/4 inch from the top. Cut out 6 inches of a full strand of embroidery thread or thin metal wire to secure and attach the loops of the tassel.Wrap this thread or wire over the loops some 1/4 inch down from the knot you just made. Tie securely.You can also use thin satin ribbons for this.
You can make ahead for the tassel ( used to cover the head of the tassel) using beads, or even polymer clay.

Cut all the ends of the tassels evenly with sharp scissors. Separate the yarns.Thread some beads and tie it to the car keys. If I had added some metallic thread in between it would have added a sparkle in between

Separate the strands for a fuller look to the tassels.